More and more cities around the world are starting to take experiments with autonomous vehicles out onto the streets. In doing so, they hope to get insight into the opportunities and challenges that such kind of vehicles can bring to future urban mobility. We already reported on such initiatives as Robomart and Babcock Ranch — now it’s time to have a look at what’s happening in Stockholm.

Since the beginning of the year, two small shuttle buses have started to drive along a 1.5 kilometer-long stretch of public roads in Kista, Stockholm’s highly technology-oriented district. Carrying 12 passengers at the time, the buses maneuver the streets using a GPS system and a range of sensors that detect bus stops and traffic lights, causing a steering wheel to be obsolete. With their maximum speed at 24 kilometers an hour, the buses currently aren’t promising a rapid commute, but the fact that they can be used free of charge might offer some compensation for the former. 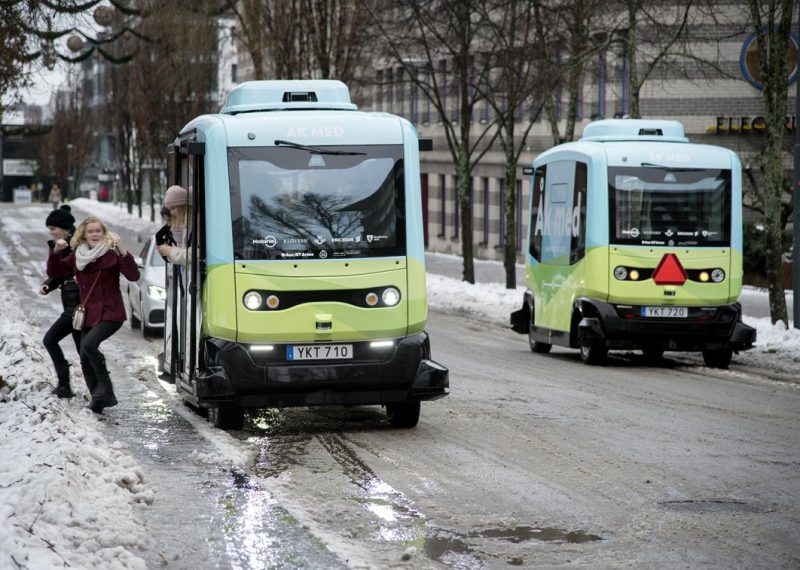 The operation of the shuttle buses constitutes a six-month pilot that is part of research project Autopiloten, in which bus company Nobina cooperates with Ericsson, SJ, KTH Royal Institute of Technology, Klövern, Urban ICT Arena, and the City of Stockholm in order to explore the (future) possibilities of self-driving vehicles for public transport provisioning. According to Kristoffer Tamsons, Stockholm’s County Council Commissioner of Transport, the project therefore excellently fits the Swedish capital’s ambition to “make automated buses an integral part of the transport network” and to significantly reduce the number of cars in the city.

At the moment, the buses are not operated fully autonomously—there always is a driver on board who can take control of the bus in case of emergency, as is required under current legislation in Sweden. But with more applications for real-life test pilots of self-driving vehicles on the Swedish Transport Agency’s roll, legislative changes might not be that far ahead anymore when these pilots prove successful.