Bark, the company that introduced monthly subscription boxes for dog treats and toys, is planning to open its first BarkPark — a member-only cafe and dog park in Nashville.

BarkBox, a subscription box containing different dog toys and treats has been increasingly popular amongst dog owners in the US. Bark — the brand behind it, came up with the BarkPark — a new type of urban space targeted at dogs and their owners.

The BarkPark allows dogs to run freely off-leash within the area and offers them Bark toys and treats. As for the owners, they can benefit from free WiFi, a little coffee shop and possibility to ask questions to the BARK staff. Furthermore, events such as live music, beer tasting and movie screenings are planned weekly and can be attended by owners and dogs alike. For a price of $19 per day your dog and up to two accompanying humans can access the BarkPark for a full day. Weekly and seasonal passes are also available for $49 and $78 consecutively. Although the park has not yet been opened, a pop-up BarkPark was organized in Nashville between September and mid-November 2018 to test the idea and maybe expand it to different cities. 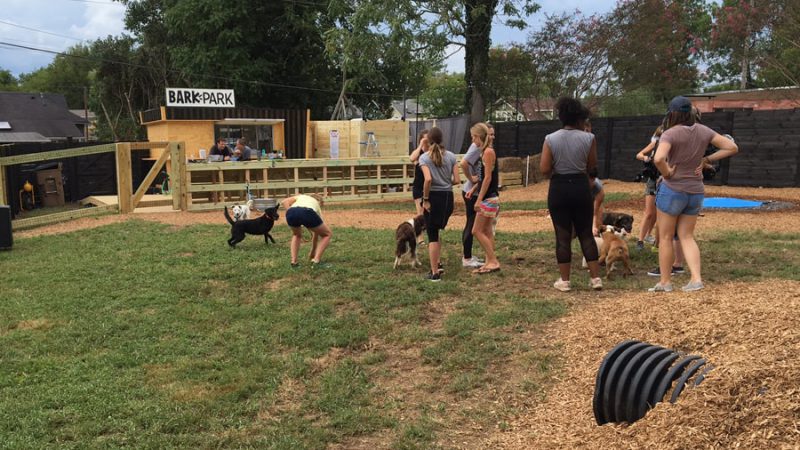 Bark describes the new park idea as “an ultra-fun dog park that doubles as a hip human hangout for playing, working, and chilling”. This semi-public space follows a new trend of specialization in the urban realm. More and more places become targeted towards specific lifestyles, for example the BarkPark is chiefly meant for dog-owners who also enjoy going to cafes and mingling with other dog owners.

Businesses creating spaces and privatizing city-scapes is another current motion observable in many western cities. Similarly to BarkPark, the bookable, on-demand rooftop park Plot in Manchester is an example of private urban spaces available for a specific audience.